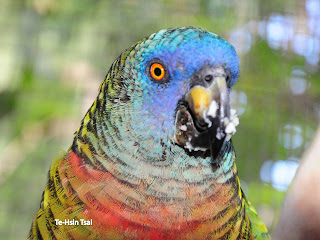 Photo / Te-Hsin Tsai
Article / Nicole La Force
Most St. Lucians if asked can tell you that our national bird is the Amazona versicolor and many too can tell you its pet name Jacquot. Many would remember the Jacquot Magazine “Bush Talk” where it was “Jacquot say this… and Jacquot say that…..”
If you look at any local visitor’s magazine you would see our national bird prominently featured. The Amazona versicolor is a symbol of our nation, a symbol of our national pride. It’s even on our coat of arms!
The thing is many persons don’t know the history behind all this. Saving the Amazona versicolor from extinction was probably and is most likely to this day the most successful conservation and education awareness campaign to happen in St. Lucia.
We were inundated with images of our parrot on bill boards, T-shirts, bumper stickers, mascots in schools, exercise books, through song and poems and don’t forget the famous Jacquot bus which went around the island spreading the  “Save Jacquot” message.
In the mid 1970’s the parrot population was estimated to be 100 to 150 individuals. This near extinction was due to hunting and forest destruction. This intensive awareness pride campaign became necessary to prevent the parrot’s extinction. The then chief forest officer Gabrielle “Coco” Charles along with famous conservationist Paul Butler, were in the forefront of this awareness campaign.
These are several reasons why the parrot population has increased but perhaps the most important is that in September of 1979, the parrot was declared the National Bird of St. Lucia. Also in 1980 a progressive piece of legislation was passed, that of the Wildlife Protection Act which banned the hunting and capture of all wildlife species in St. Lucia.
In addition, nature conservation policies adopted by the Forestry Department have resulted in remarkable change in the fortunes of the forest reserves and St. Lucia Parrot. The Department’s Environmental Education Campaign has ensured that public concern for the St. Lucia parrot has reduced the incidence of deforestation, hunting and other illicit activates in the forest reserves and provide a springboard for protection and conservation of our national bird.
As it currently stands our parrot population is well over 1500 and could be seen in Millet, Barre de L’isle, Des Cartieres and other areas. It is a beautiful thing to see them gliding through our forest. To think if their hunting was not arrested through laws and education awareness, there probably would not have had one left to be seen and enjoyed. What a shame that would be! It would be like waking up one morning and finding that our twin pitons have disappeared. St. Lucia wouldn’t be truly unique and distinguishable without them. 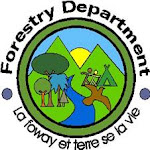 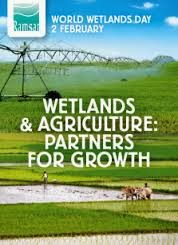